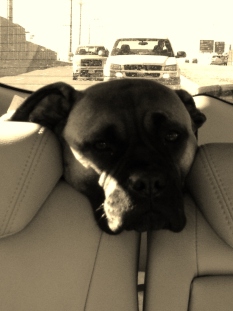 One of the challenges of having rescue dogs is that you rarely get anything close to a real history on them. This is the sum total of what we know about Lily:

So you’re left to put the pieces together based on observed behavior.

Yup. Black SUVs. When we first began walking her, Lily chased pretty much every car that drove by. But once she got comfortable on her leash, it shifted to being almost exclusively black SUVs. Which can lead one to imagine all kinds of crazy scenarios about what might have sparked this fixation.

We’ll never know the cause of her behavior. But we have to live with the consequences.

Because Lily will never win in Dog v. Car.

I do my own version of chasing cars. I just do it in my own mind. I chase thoughts around in my head. What-if’s. What then’s. Whatamigoingtodo’s. They spin and churn and roll around my brain and I chase chase chase chase them. Until I’m so wrought up I can’t even think straight.

My automatic behaviors may not be as dangerous as Lily’s, but they’re just as destructive.

God tells us to cast all our anxieties on Him. And I’m working on it. But I have to admit, I haven’t mastered it yet. Just like Lily hasn’t quite gotten past chasing those darn black SUVs.

Lily and I are quite a pair. But I’m hopeful and trusting that God’s going to help us both overcome our automatic behaviors in time.

A record of God’s work to redeem me day-by-day, taught through the four-legged babies we share our lives with.