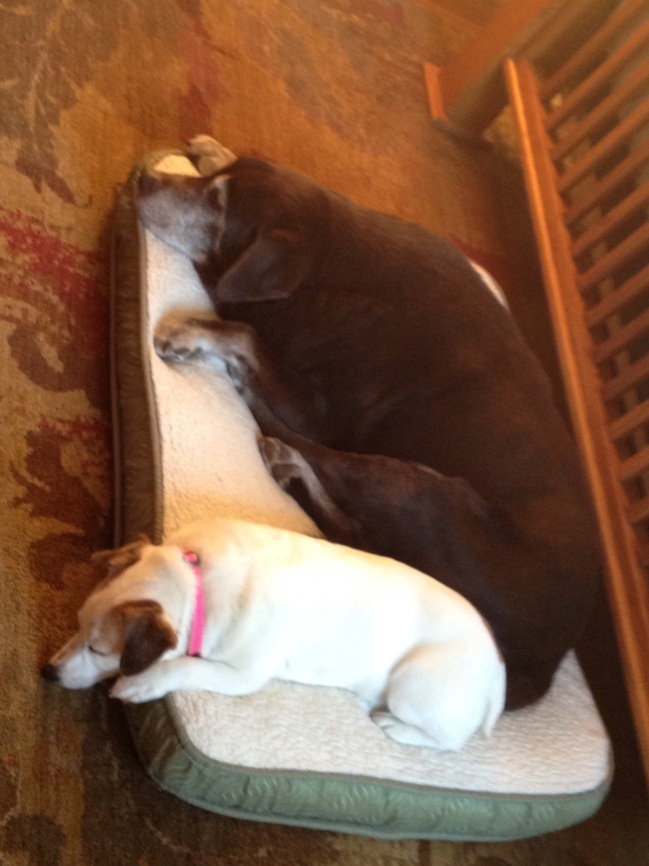 à vu. We’ve all experienced it at one time or another. But can dogs sense it too?

I wondered that this weekend as I leashed up Chico to take him to the vet. He loves going for walks, so he chattered away and walked in circles to tell me to hurry up with the leash when he realized I was taking him out. We scooted out the door before the other two realized what we were doing, and headed for the car.

As we ducked out the opening garage door, Chico turned around to look for his companions. Except they weren’t there. He turned around and started walking back. I tugged on his leash and opened up the back hatch. Chico looked back once more, saw that he was alone, and darted for the house.

It took some effort, but I finally pulled him over to the car and lifted him into the back. But he was not happy. He circled and whined. He panted and drooled. By the time we got to the vet, he had shed what looked like half his coat and had drooled so much there was a wet spot on the bed he sat on.

On the drive home, I was reflecting on what might have caused Chico such anxiety. He doesn’t love the vet, but this reaction was way beyond his usual going-to-the-vet stress response. So what might it be?

It dawned on me that perhaps the last time he had ridden in car by himself, he was leaving behind the home he had known for so many years and coming to ours. He had been uprooted from the home he knew and loved and left at a home he had to grow to love.

Could he have thought that I was not simply taking him to the vet, but instead taking him away from his home to a new family?

Was there something about that morning – the prospect of getting in a car by himself – that was familiar?

Sometimes I find myself responding like Chico. I step into a situation and anxiety overwhelms me. Sometimes I can identify the cause, but other times, there is just the vague sense that something feels familiar – and dangerous.

How do we learn to let go of old fears? How do we reset those déjà vu reactions to ground ourselves in the present and let go of the fear of the past?

I can’t say that I’ve got the final answer. But I’m learning that praying helps. So does taking a moment when those feelings kick in to remember that I am never alone. And reminding myself that I have a choice in how I respond in those situations.

As for Chico, he was relieved to get home to his fur-siblings. He ran in the house and was greeted by two excited sisters. They sniffed and snorted and licked one another for about five minutes. Then they all decided a nap was in order.

Life is stressful. Keep calm and take a nap. 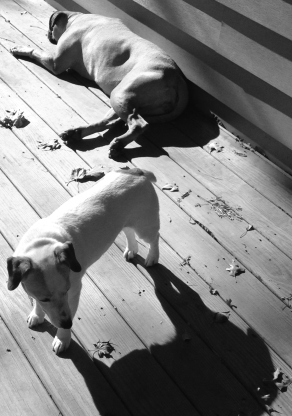 Shortly after we adopted Lily, we realized she could jump our 4’ fence. From a sitting position. So we decided to replace our 4’ fence with one that’s 6’ instead.

At 14, Chico needs to go out frequently, so we have a dog door that opens to the backyard. So the day of the install I worked from home to ensure we didn’t have accidents in the house.

That was the plan at least.

All day long the dogs whined and paced at the back door. I’d walk them, but as soon as we got in, they were at the back door again wanting to go out. We went for our third walk of the day around 3pm. I took the dogs into the house, and I went back to get the mail.

Three minutes later I walked into the house – and someone had pooped on the kitchen floor. Seriously? THEY WERE JUST OUTSIDE. What was going on with them?

Like kids, dogs thrive on routine. And what seemed like a small change in routine to us had completely thrown the dogs for a loop.

This week my work world was rocked. Hard. And while the change could certainly be defined as “routine” – in that it happens every day in the world of work – it felt earth-shattering to me. And I’ve been doing my own human version of whining and pacing at the back door.

Fear. Worry. Anxiety. Fretting. Those have been my companions this week.

But unlike my dogs, I don’t have an excuse for fixating on my circumstances. We are told to “be anxious for nothing”, and I need to start living out that command.

Each day I am being confronted with situations, big and small, that require me to trust that God has my back. Each day I am being taught that, while we never know when life will throw us an unwanted change, I can choose how I respond.

Instead of pacing and whining, I can pray and trust.

And that’s a much better option than pooping on someone’s floor…(sorry, I just couldn’t resist)…

A record of God’s work to redeem me day-by-day, taught through the four-legged babies we share our lives with.